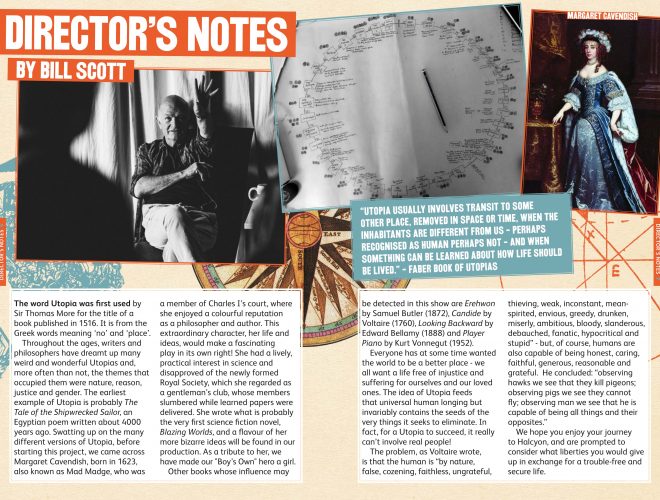 “Utopia usually involves transit to some other place, removed in space or time, when the inhabitants are different from us – perhaps recognised as human perhaps not – and when something can be learned about how life should be lived.” – Faber Book of Utopias

The word Utopia was first used by Sir Thomas More for the title of a book published in 1516. It is from the Greek words meaning ‘no’ and ‘place’.

Throughout the ages, writers and philosophers have dreamt up many weird and wonderful Utopias and, more often than not, the themes that occupied them were nature, reason, justice and gender. The earliest example of Utopia is probably The Tale of the Shipwrecked Sailor, an Egyptian poem written about 4000 years ago. Swatting up on the many different versions of Utopia, before starting this project, we came across Margaret Cavendish, born in 1623, also known as Mad Madge, who was a member of Charles I’s court, where she enjoyed a colourful reputation as a philosopher and author. This extraordinary character, her life and ideas, would make a fascinating play in its own right! She had a lively, practical interest in science and disapproved of the newly formed Royal Society, which she regarded as a gentleman’s club, whose members slumbered while learned papers were delivered. She wrote what is probably the very first science fiction novel, Blazing Worlds, and a flavour of her more bizarre ideas will be found in our production. As a tribute to her, we have made our Boy’s Own hero a girl.

Other books whose influence may be detected in this show are Erehwon by Samuel Butler (1872), Candide by Voltaire (1760), Looking Backward by Edward Bellamy (1888) and Player Piano by Kurt Vonnegut (1952).

Everyone has at some time have wanted the world to be a better place – we all want a life free of injustice and suffering for ourselves and our loved ones. The idea of Utopia feeds that universal human longing but invariably contains the seeds of the very things it seeks to eliminate. In fact, for a utopia to succeed, it rally can’t involve real people!

The problem, as Voltaire wrote, is that the human is “by nature, false, cozening, faithless, ungrateful, thieving, weak, inconstant, mean-spirited, envious, greedy, drunken, miserly, ambitious, bloody, slanderous, debauched, fanatic, hypocritical and stupid” – but of course humans are also capable of being honest, caring, faithful, generous, reasonable and grateful.  He concluded: “observing hawks we see that they kill pigeons; observing pigs we see they cannot fly; observing man we see that he is capable of being all things and their opposites.”

We hope you enjoy your journey to Halcyon, and are prompted to consider what liberties you would give up in exchange for a trouble-free and secure life. Bill Scott