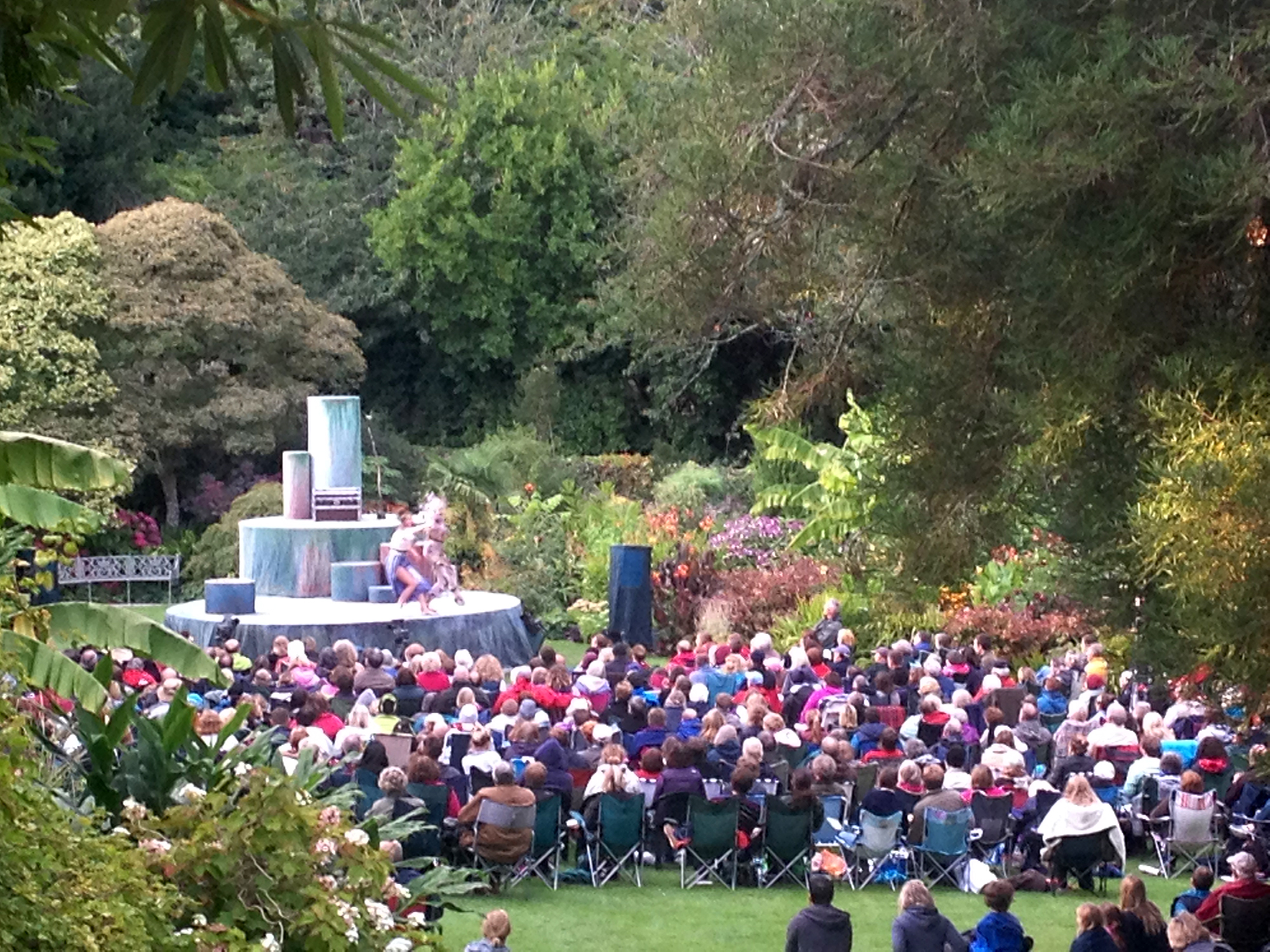 Open-air theatre in Cornwall is a longstanding tradition. Many hundreds of years ago during Mediaeval times, plays at outdoor amphitheatres were a popular form of cultural community gatherings. These historic venues are known as Plen-an-Gwary still exist today–and Miracle Theatre often performs in them! We’ve put together a list of 10 spectacular outdoor theatres in Cornwall to demonstrate the wonderful abundance of this form of culture in our area, and, of course, so that you’re in the know for the season of open-air theatre this summer.

This National Trust property near Truro is a tranquil, varied garden in a fabulous position looking onto the River Fal – a delightful spot for outdoor theatre. Trelissick hosts some smashing productions from all over England. This is a proper picnic spot: remember your blankets, camping chairs and snacks.

Probably the best known spot for open-air theatre in Cornwall, this amphitheatre boasts a stunning view of the open sea and is over 90 years old. You’ll perch on tiered rock seating, looking down upon a gorgeous carved rock stage.

This charming theatre is in the park in the heart of Penzance. Penlee Park hosts a varied season each summer, including circus, choirs, bands, musicals and theatre performances. Seats are provided.

Perran Round is the best surviving example of a Plen-an-Gwary. This historical landmark is situated midway between the villages of Goonhavern and Perranporth. In the middle of the structure is a hollowed out pit with a tunnel leading in from the exterior called a ‘Devil’s Spoon’, which was used to allow satan to enter the stage!

Lying a couple of miles southeast of Redruth, Carn Marth is one of the series of ancient hills that run down the backbone of Cornwall stretching all the way to Lands End. At the amphitheatre, you’ll sit comfortably on grass-topped stone tiers. This is one of the venues that we’ll be bringing King Lear to this summer.

A rural escape built by the community, for the community in the heart of Newquay. The open-air theatre at Newquay Orchard is a newly created plen an gwary, part of the initiative to bring “green lungs” back into an ever busier Newquay.

Protected by the hills behind, massive trees and parkland, sits a sheltered botanical oasis: Tregrehan Garden. Just outside St Austell, Tregrehan has been home to the Carlyon family since 1565. Jovey Carlyon’s passion for trees during the late 19th century is evident in the towering specimens seen today. This is such a charming spot for open-air theatre goers to enjoy!

Right in the middle of St Ives, between Porthmeor Beach and the Harbour, rises an unexpected wild and grassy promontory. For hundreds of years this site provided a natural fortress for the inhabitants of St Ives in times of trouble – and makes a spectacular venue for staging the dramatic story of the foolish and embattled King Lear. 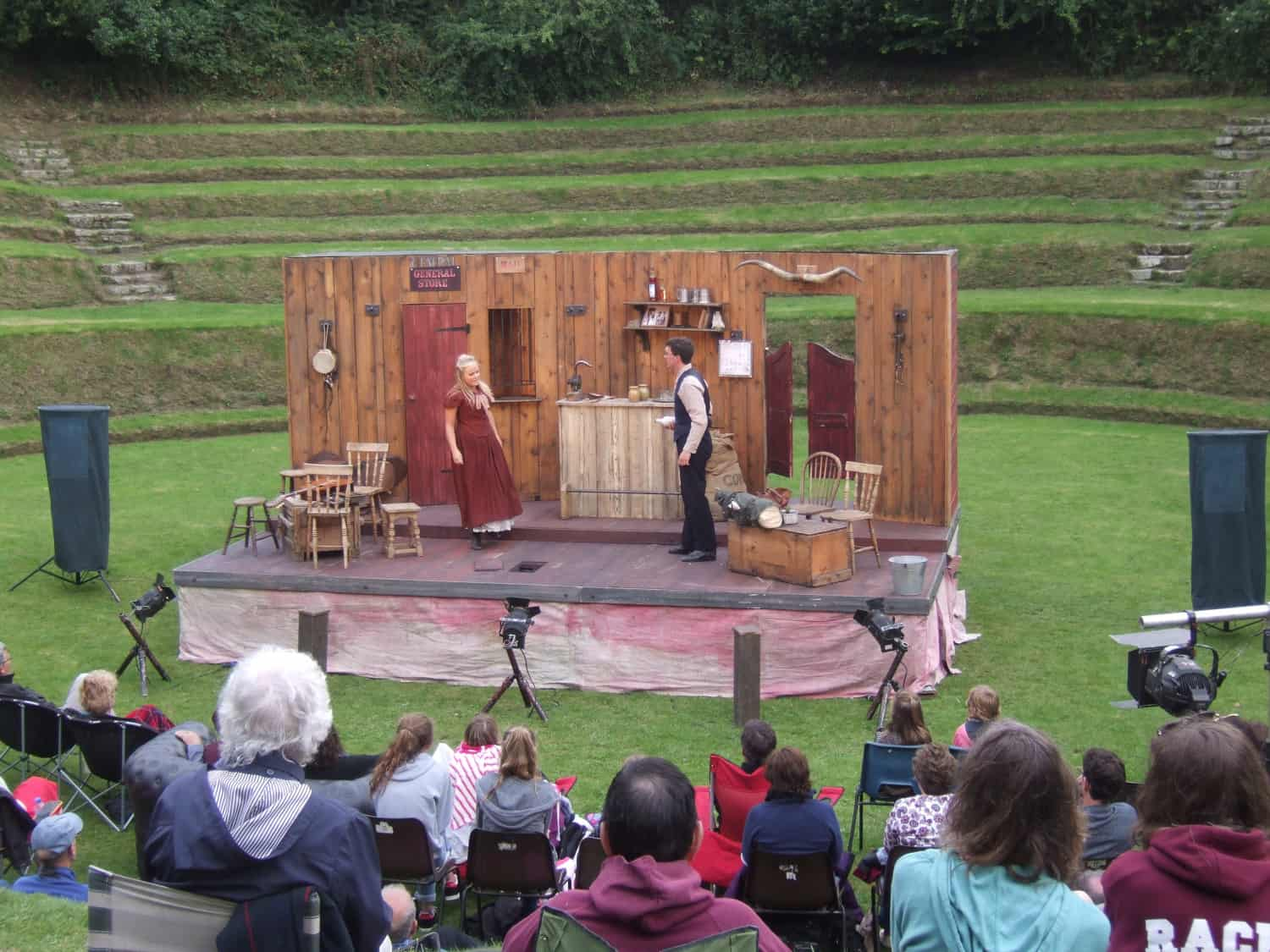 Originally opened in 1850, Indian Queens Pit was unused for many years until it reopened in 1978 and now hosts many open-air events including theatre, concerts and fetes. The image above is Miracle Theatre’s The Magnificent Three at Indian Queens Pit in 2015.

This is home to arguably the oldest working theatre in Britain, standing in the heart of the community for over 600 years. This Plen-an-Gwary is a scheduled ancient monument and one of only two surviving outdoor amphitheatres in Cornwall.

There are plenty more open-air theatre venues in Cornwall, but these are the ones we think you should all know about as a start. You’ll have noticed that a few of the fabulous venues above will be hosting King Lear this summer–we hope to see you there for Miracle’s wild spell-binding open air theatre!