Really should be on your go to list for the summer!
June 22Life's a Dream

The script, which has been adapted by Bill Scott, has plenty of laughs and has been skilfully written in modern day prose. From the hilariously choreographed sword fight to Bugle’s perfectly timed one-liners, there is plenty of laughter to lift the audience and give depth to the story unfolding before us. With the peppering of virtuous sayings such as ‘arrogance has put him back in chains’ and ‘in this world, we are all dreamers,’ which are reminiscent of the Shakespearean era of the original writer, Miracle Theatre has, once again, brought to us a show that takes us through every emotion and makes us think differently about how we act ourselves and how we treat other people. Read full review by Anita Hunt  HERE

It’s All A Dream

MIRACLE has a reputation for producing comical, highly entertaining and thought-provoking shows, suitable for anyone and everyone.West Briton
June 22Life's a Dream

This summer, for the first time, Miracle presents a rich and varied summer season featuring Life’s A Dream, an epic fable of love, war and destiny and – back by popular demand – The Magnificent Three, a rootin’ tootin’ toe-tappin’ comedy western, which starts its run on August 5.

Miracle shows pop up in unexpected and extraordinary places across the South West, including gardens, beaches, castles and clifftops. So pack up a picnic and catch Miracle at your favourite venue or head out and discover somewhere new.

Cornwall’s Miracle Theatre has been delivering eclectic, quality comic drama to audiences across the country for decades. Simon Parker looks forward to taking his seat for their latest summer show. Read the article HERE

With mistaken identities, crazy characters, a war, love, lies and deception Miracle’s latest production crackles along at a superb pace and will be a runaway success this summer!

With mistaken identities, crazy characters, a war, love, lies and deception Miracle’s latest production crackles along at a superb pace and will be a runaway success this summer! Read the full review HERE

Miracle Theatre thrives on surprises. Director Bill Scott has re-worked Life’s a Dream, a complex philosophical allegory by the 17th century Spanish playwright Pedro Calderon de la Barca into a surreal fable of moral awakening that grapples with the weightiest of human dilemmas. Think Hamlet, Pandora’s Box, Caliban, Sleeping Beauty, Prometheus, and you will find them waving from the edges of this unsettling parable about a king who cages his new-born son because he believes the stars foretell his tyranny. Challenging stuff, perhaps, but delivered with Miracle’s usual comic buffoonery.
You can read the full review HERE

We're delighted to be celebrating our 5th year working in partnership with Classic Cottages this summer.

As our main season sponsor Classic contribute vital financial support as well as a large dollop of fun – yes  the Classic Couch is back at various venues this summer, so keep your eyes out for it when you arrive! Simply fill in your details on the free entry card, and keep your fingers crossed that your name gets pick out so you can sit yourself down on everyone’s favourite inflatable!

A Prince is Born  composed by Tom Adams – click to have a little taste!

May 26Life's a Dream, The Magnificent Three

May 26Life's a Dream, The Magnificent Three

May 20Life's a Dream, The Magnificent Three

See both shows this summer & save £’s!

May 20Life's a Dream, The Magnificent Three

This summer as we’re producing 2 shows we thought you might like see both & save £’s at the same time!

By booking in advance not only will you save money, but you can also mix and match where you see a show in Cornwall. 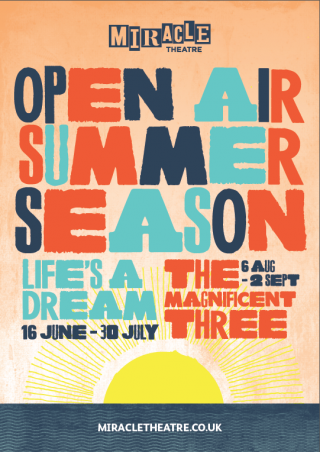